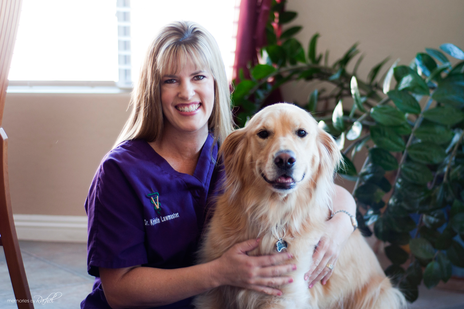 Dr. Kristin Lawmaster and "Chelsea Belle" Lawmaster
Dr. Kristin Lawmaster
Dr. Kristin Lawmaster grew up in southern California, and graduated from Cal Poly Pomona in 1996 with a B.S. in Zoology.  She followed her husband to the University of Illinois, College of Veterinary Medicine, where she received her veterinary degree in 2000.  She started her veterinary career in Monterey, California, where she and her husband owned their own animal hospital for a few years.  After they started having children they realized practice ownership was too time-consuming for them so they sold their practice and moved to Arizona in 2006, to be closer to family.  Since then she has worked at various small animal practices as a relief veterinarian.  She lives in Chandler with her husband Todd, also a veterinarian, their two children, Xavier and Alexis, and two dogs.

In the summer of 2013, her parents realized they needed to euthanize their beloved golden retriever, Cheyenne, and at the time she happened to be preparing for a camping trip in the mountains.  They drove all the way from California to meet her at the campsite.  This was a heartbreaking and stressful situation for all of them, but it was made easier when they witnessed how clearly happy and relaxed Cheyenne was in this beautiful setting, among the pine trees, and surrounded by those who loved her.

When it was over, Dr. Lawmaster couldn’t help thinking to herself how lucky their dog was to leave this world in such a comforting environment.  She wished every pet could have a similar experience within the sanctity of familiarity of their own home.  And so she created A Peaceful Farewell.

Dr. Todd Lawmaster
Upon completing his undergraduate studies at California State Polytechnic University, Todd was awarded a research assistantship in veterinary oncology from the University of Illinois Urbana–Champaign, School of Veterinary Medicine where he concurrently earned his doctorate in veterinary medicine while working in a laboratory which focused on various aspects of oncology such as evaluating predictive and prognostic biomarkers for chemotherapy response, exploring personalized medicine approaches using spontaneous canine tumors as a translational model system, and adapting human chemotherapeutics to companion animals with spontaneously arising malignancies.  In addition to fulfilling his research obligations, Todd developed a passion for diagnostic imaging and honed his ultrasonography skills during his senior year of veterinary school by taking an unprecedented number of elective radiology rotations.

After graduating with honors from the University of Illinois Urbana–Champaign, School of Veterinary Medicine in 1999, Todd moved back to California with Kristin following suit the subsequent year.  Within a few short years Todd and Kristin purchased a struggling small animal veterinary hospital in Monterey and proceeded to convert it into a state-of-the art facility that quickly earned the highly sought-after American Animal Hospital Association’s Accreditation with Honors. It was within the walls of this small animal hospital that Todd routinely employed his knowledge and skills as an ultrasonographer to help manage various internal medicine cases.  It was through the use of ultrasonography that Todd quickly appreciated the conciliatory and affirming power this modality provided fellow pet owners when it came time for them to make the compassionate decision to humanely euthanize their failing fury companion after a terminal disease such as cancer was identified.

In 2004, the Drs. Lawmaster’s son, Xavier, was born and brought a new and joyous perspective to their lives.

In 2006, the Drs. Lawmaster decided to sell the small animal practice to spend more quality time with Xavier and moved to Arizona to be near several of their siblings who had migrated from Southern California over the years.

In 2007, the Drs. Lawmaster’s little princess, Alexis, was born and quickly introduced a whimsical element that completed their family.

In addition to assisting Kristin with in-home pet euthanasias, Todd has continued to expand his mobile veterinary ultrasound service, Pet Scan, across the Greater Phoenix Metropolitan Area. Since moving to Arizona, Todd has also reunited with his passion for research when in 2009 he accepted a position as the clinical veterinarian at St. Joseph’s Hospital and Medical Center where he is involved with various research projects focusing on neurology, oncology, immunology, pharmacology, and cardiology.

In addition to his passion for family, pets, diagnostic imaging, and research, Todd also indulges in his other passions… soccer and working with kids.  When Todd is not busy with his family or veterinary obligations, he can be found on the pitch coaching one of his club soccer teams.